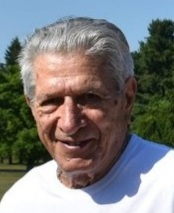 John G. Sack Of Silver Creek, NY entered into rest December 11, 2020 at age 87. He was born November 12, 1933 to the late Dominic and Grace (Borrello) Sack. A life long resident of Silver Creek he married the late Virginia “Virge” (Leone) Sack, September 4, 1954. Virge passed away January 26, 2020. John Graduated from Silver Creek Central School in 1952 where he was an honors winning member of both the Varsity Football and Track teams. He spent some time working for the railroad before he began his own general contracting business. At age 26 he built his own home in Alfred Heights, Silver Creek as well as several other homes in the same development and surrounding area. John took an early retirement due to health issues and began his retirement hobby of collecting things to tinker with. He enjoyed countless hours of fixing anything mechanical. In his free time John enjoyed traveling to Amish country, visiting and taking candy to the Amish children. He was a recent resident of St. Columbans on the Lake where he continued to tinker and fix things to keep himself busy. He enjoyed th beautiful surroundings of St. Columbans where he would tour the grounds on scooters with his sidekick Richard “Dick” Slausen. The staff referred to the two as “Double Troube” Throughout his life John enjoyed helping others and telling stories of his years growing up. His greatest joy however was spending time with his family. He is survided by his daughters Grace Sack of Silver Creek and Debra (Tom) Cooney of Ripley, son; John J. (Debra) Sack of Mooresville, NC, sister; Neline Rizzo of North Collins, 8 grandchildren; Krista (Dan) Ingerick of Rochester, NY, Aaron Lyman of Eustis, Fl, Christopher Bardo of Riverview Fl, John M. Burt of Silver Creek, Alexandra, Jessica, Samantha and Stephanie Sack of Mooresville, NC, 4 great grandchildren; Connor and Isabella Ingerick and Avery and Brantley Lyman. Besides his parents John is pre deceased by his wife Virge, daughters ; Diane Carol and Cheryl Ann, brother; Dominic, Patrick, Anthony and Salvatore Sack, sister; Ann Gerrity. No services will be held. Donations in Johns Memory may be made to St. Columbans on the Lake, Silver Creek, NY or Chautauqua Hospice and Paliative Care, Lakewood, NY Arrangements by ADDISON FUNERAL HOME INC, Angola, NY
To plant a beautiful memorial tree in memory of John Sack, please visit our Tree Store

A Memorial Tree was planted for John
We are deeply sorry for your loss ~ the staff at Addison Funeral Home Inc.
Join in honoring their life - plant a memorial tree
Services for John Sack
There are no events scheduled. You can still show your support by planting a tree in memory of John Sack.
Plant a tree in memory of John
Share Your Memory of
John
Upload Your Memory View All Memories
Be the first to upload a memory!
Share A Memory
Plant a Tree