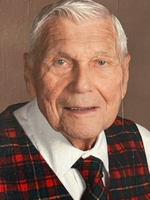 Eugene Charles Chillcott Age 96, died peacefully in Auburndale, Florida on February 25, 2022. Gene was born in Batavia, NY. He spent most of his life in WNY. He graduated from Parker High School in 1943. After graduation, Gene joined the US Navy and served his country during WWII aboard the Destroyer Escort, USS Swasey in the Atlantic and later in the Pacific theater. He married his high school sweetheart in 1945. They had three sons, Gary and identical twins David and Douglas. Gene worked for M&T Bank for 33 years serving numerous WNY branches. He also worked for the Buffalo Courier Express over 20 years as a newspaper distributor. In retirement, Gene enjoyed many years traveling the US in the comfort of his RV. He also spent winters in San Antonio, TX. Gene is survived by two sons, David and Gary, three grandchildren, and seven great grandchildren. He was proceeded in death by his brother, former wife, and youngest son. Interment will be in the Florida National Cemetery. Arrangements by Addison Funeral Home Inc.